Tales From The Road Part 1

Tales From The Road Part 1, The other day picked up a load that picked up 100 miles west of Houston off of I-10 that delivered in Atlanta the following day. My route would take me along I-10 eastbound along the Gulf Coast until I got into Mississippi to start heading north. Before I left I did my usual check of the weather on my Weather Channel app and saw that I would be driving into a pretty big storm at some point. 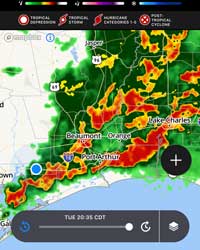 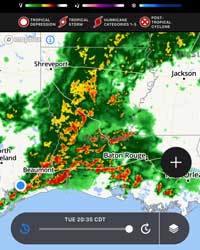 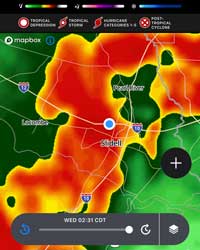 My goal was to get as far as I could before it got too bad because that storm looked gnarly on the Weather Channel app. I included screenshots of exactly how bad it looked. I made it over 460 miles before I had to shut it down for safety. This is what I saw and experienced on that drive.

The left and middle pics are where I started, the one in the right is where I finished. But at this part in the last picture the rain was so intense that I was doing 40mph. My visibility was about 50 yards and the winds kept pushing me sideways. I weighed over 76,000 pounds total so the winds were super strong to move me sideways like they were doing.

There was so much water on the road and the winds were so strong that the water looked exactly like in the winter when snow blown on the road in a snowstorm. At some points where there was lots of standing water, the wind had it breaking in little waves like you would see on ocean beaches. I wish I had my dash cam set up, it was crazy to see.

There were quite a few accidents along the way as well. In that 460 miles I saw one truck that was on the side of the road and stuck in the mud in a construction zone. He probably lost control when the lanes shifted to the left. It was so dark in that spot and he was most likely driving too fast for the conditions. One car spun out right in front of me about a mile after it sped past me. It ended up in the median but apparently there wasn’t any damage because it drove out of the median and got back on the road.

It did get off at the next exit so it may have stopped for a while to check for damage and and for the driver to change their underwear, lol. Then there was a car far off the right side of the road. laying in some trees and facing the wrong direction. It probably spun out from hitting some standing water just going too fast and the wind pushed it off of the road, I didn’t see that one so I don’t know for sure.

Lots of cars were just speeding along like it was a dry night which I will never understand. Many drivers on the roads can’t drive in perfect weather conditions but feel they can drive exactly the same in bad weather. Finally, I saw another 18 wheeler that lost control so badly that it completely blocked the exit ramp to get on I-12 from I-10 in Baton Rouge. The front of the truck and back of the trailer both wedged in the concrete barriers.

To me that means it hit that off-ramp incredibly too fast and couldn’t slow down before it started to curve. That is a basic mistake that truckers make a lot but should NEVER make, going too fast when exiting. I don’t know how hard it was raining when it happened but driving too fast for the exit and the weather. It was a wild night! Just do me a favor and drive slower in heavy rain, it will help you from getting into an accident. Just remember y’all, keep it between the ditches!

If you click any links on this website and buy anything we get a small commission for the referral and helps defer the cost of running this website. This adds no cost to your purchase and would be greatly appreciated.

As always, if you want to learn more about which trucking products that may help you with your in your trucking career, checkout all of the great equipment and accessories Amazon has to offer here.

Facebook Twitter Pinterest linkedin Telegram
Trucker Etiquette, Truck drivers are professionals. We have a difficult job that requires a lot of skill and training to just get ...

END_OF_DOCUMENT_TOKEN_TO_BE_REPLACED

close
Start typing to see posts you are looking for.
Sidebar Scroll To Top